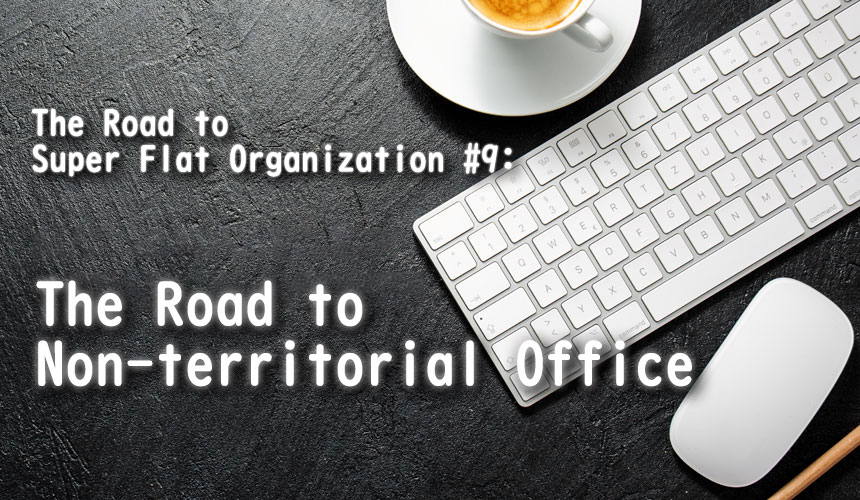 The Road to Super Flat Organization #9: The Road to Non-territorial Office

So far, I mostly talked about HR and organization. So this time, I will write about the changes in the office.

From two floors office to a single floor

Before we moved to our current office in Asakusabashi, ISAO (Colorkrew, at that time) office was in Yotsuya.

The company started in Roppongi (The name begins with the Japanese number six) at the foundation. It then moved to Gotanda (begins with five), Yotsuya (four), so the next could be Mitaka (three)!
That was one of the jokes we often told each other.

The office in Yotsuya was in the building that belonged to the former parent company. Therefore, newborn ISAO needed quick moving.

The Yotsuya office was at a convenient location, and we loved the environment. However, we had a problem: we had two working areas on the 2nd and 3rd floors.

Since I was usually on the third floor, I did not have many opportunities to meet with those on the second floor, neither had a chance to talk with them casually.
Besides, the floor was in the shape of an L, so we could not see everyone on the same floor.

At the time, ISAO’s achievement was in red, and I thought everyone’s not seeing everyone’s face was a problem that hindered them from uniting.

Then, we formed a moving project team and started looking for an office around the Yamanote line.

The priority was to find a one-floor office that could contain everyone at the same time. As a result, we decided to move to the current office at Asakusabashi.

Since we were a loss-making company, the rent must be affordable.

However, we could not give up a one-floor office.

Finally, we concluded to move to an office 12 minutes away from Akihabara station.

It is our current office, in Asakusabashi rather than Akihabara (honestly, the address says it’s in Asakusabashi).
It was a bit old and a little far from the station. So when we moved, we said, “This would be helpful for our exercise.”

We moved in the holiday week in May 2011 and soon realized the benefits of a one-floor office.
The moments we were like, “Oh, who is that person?” dramatically decreased.

We had more chances to encounter others unintentionally, talk casually and understand others better.

This photo is from that time in the Asakusabashi office.
The office is on one floor, and you can see everyone.

However, at the time, there were black desk partitions.

These partitions were blocking the view, and because of that, the office scenery looked dark and dull.

Then, we started working on removing the partitions.

At that time, since I thought I should do it quickly, I said in an in-house SNS, “I’m thinking of removing the partitions.”

Then I found that everyone was very not agreeing.

I tried to convince them, saying, “You know, when you have a clear view, you’d feel like everyone’s closer, and it will lead to better communication!” only to find they still did not positively agree.

Maybe some didn’t feel like being seen while working.

I realized conversation would not help, so I somehow carried out saying, “We haven’t done it before, so let’s give it a try. We can redo it later.”

The second monitors are blocking the view!

After we removed the partitions, we had a much better view. But now the screens on the desk seem unnecessary.

Honestly, I enjoyed using one of the screens but decided to give it a try when one member said, “The screens are blocking face-to-face communication, and we can handle most of the work with our laptops.”

At that time, some members used desktop computers. So we replaced them with laptops and removed all the second monitors from the desks.

As you would agree, if you work in a company with designers and engineers, second monitors are super important for engineers.

I tried a lot to persuade them, such as saying “I can get you the latest Mac,” to secure a better view, and finally, successfully removed all the screens from the office.

Into a non-territorial office

In ISAO office at that time, each department had a group of desks and they sat close to each other according to the department.

Around Super Flat Organization started in Jan. 2015, there was no department division, and we started talking about office layout.
For many people, losing their desks with drawers seemed to be a loss. However, we gradually stop using them and finally got rid of them all.

I, too, was using two of the desks and one cabinet, but I threw them away at this opportunity.

Now I think I was keeping too much unnecessary stuff in them.

Nowadays, it is our daily routine to get things from our lockers to today’s workplace.

We Don’t know where they are!

When you adopted a non-territorial office, the seats vary every day. Therefore it becomes difficult to find someone even on one floor.

Recently, Colorkrew recommends full work-from-home due to the COVID-19 situation. Even before that, the number of from-home-worker was increasing.

Then we have improved Mamoru Biz, which provides “A new way to use QR Codes” and added a checking-in function to know where everyone is right now. 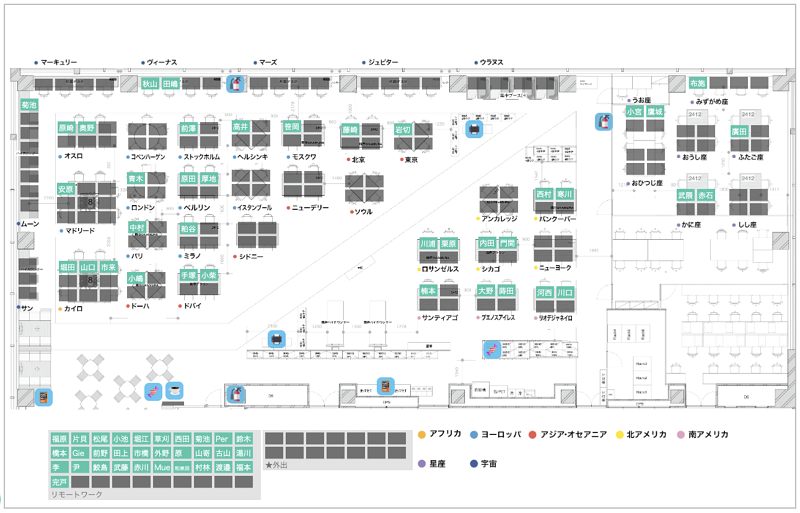 Mamoru Biz works along with attendance management service, and therefore, it was helpful for individual duty was also reduced.

I still want the second monitors!

So far, almost all of the current Colorkrew office is ready. However, we often found inconveniences while trying.

For example, we now had a non-territorial office and clear view without the second screens. However, the designers and engineers claimed that it was too inconvenient without the screens.

Then we decided to place screens at the desks on the outer part of the office, facing the windows.

Those who need multiple screens can now use the screens alongside the windows. This way, we solved the view and the screen problems.

Afterward, as responses to the requests “I want double screens” or “I want an HD screen,” we now have such screens on the window-side desks. 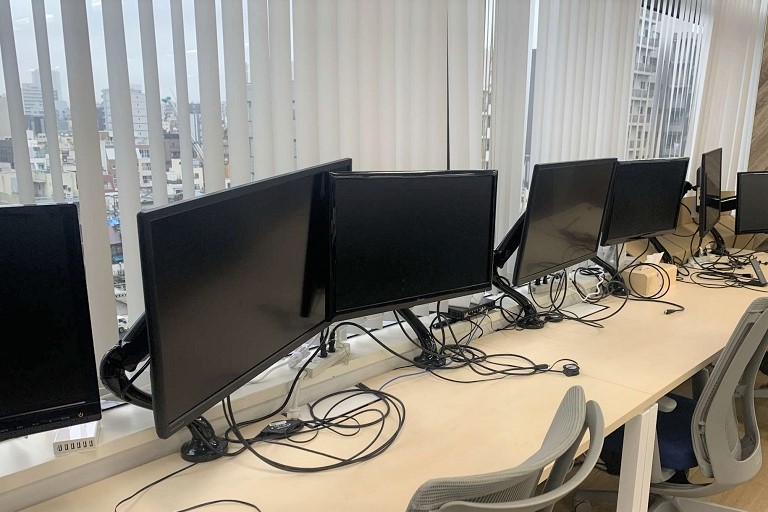 Creating office on trials and errors 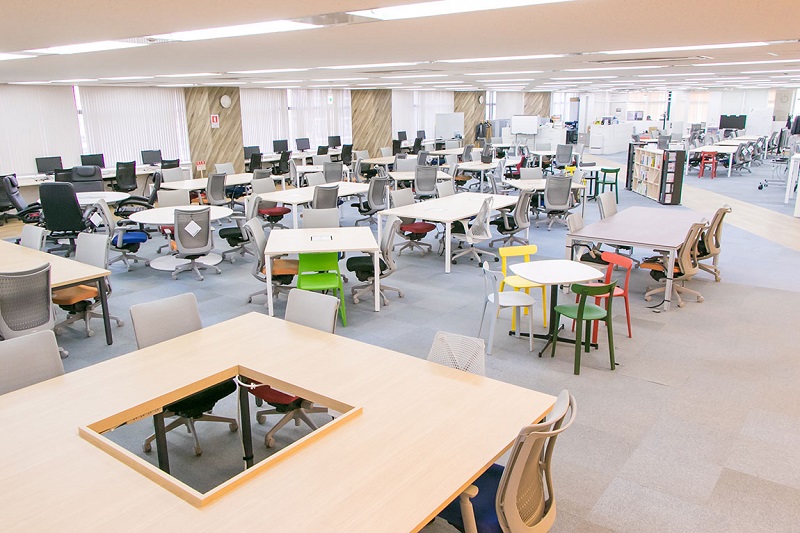 This way, we have passed many trials and errors until we came up with our current office.

We will keep improving the office to make the work in it fun and productive.

How can we change?

Regarding the question as above, I think the following are the answers:

1. To prepare an opportunity to give an opinion, even the smallest one, regarding the office environment.
Colorkrew has a “Colorkrew improvement” circle on Goalous to recruit opinions.

2. If there is discussion or disagreement, give it a quick and small try.

3. Take a while to see how it goes, and if it looks good, then do it as a whole company.

By repeating these steps, you can renovate your office.