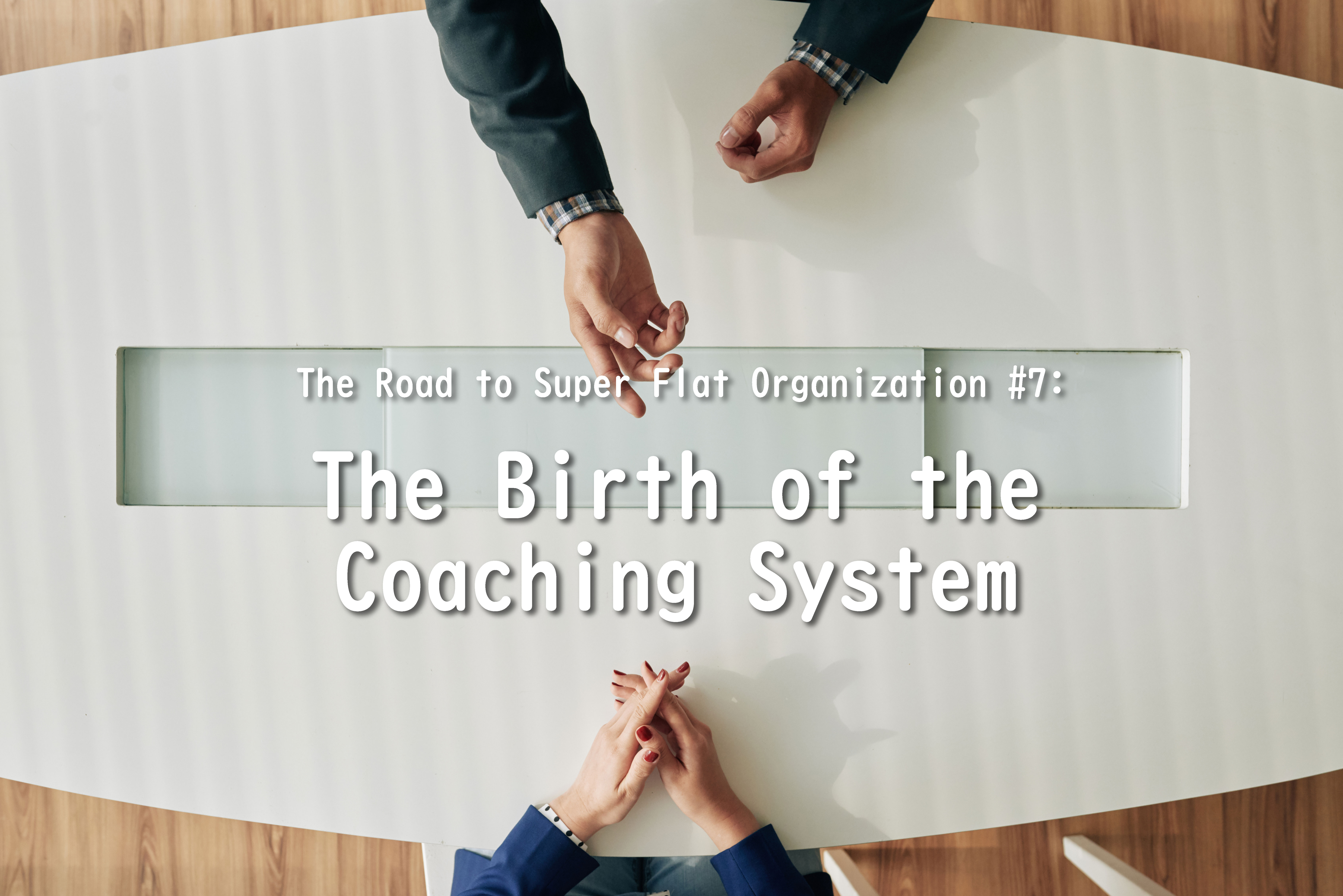 The Road to Super Flat Organization #7: The Birth of the Coaching System

This time, I will describe how we worked on the coaching system.

The roles of a manager in the previous organization

Last time, I wrote that we adopted an organization where managers are not there and replaced them with the project leaders as we decided in the management camp.

Back number: The Road to Super Flat Organization #6: The Final Touch, Goodbye Departments!

However, management was not the only role that the managers had.

They had principal roles regarding personnel education, such as evaluation or coaching.

How can we secure them in Super Flat Organization without managers? ISAO (Colorkrew at that time) came up with the idea of a new coaching system.

We defined that a coach’s role is to discuss members’ career plans and contribute to their growth.

In the coaching system at the early stage of Super Flat Organization, management members with company-wide views picked several coach candidates and suggested each member pick one.

I think we were afraid that each employee didn’t want to face their growth seriously and might choose a coach with whom they can remain at ease, or each member could not pick their best coaches on their own.

Since coaches at ISAO had another role as a coordinator of 360 degree evaluation, we were also afraid that members might choose friendly coaches and evaluations become naive.

We started this coaching system in Mar. 2015, with the start of Super Flat Organization.
While we kept operating with the coaching system for two years, we gradually realized that some assigned coaches did not fit the individual needs.
Then, we allowed anyone who claims that they want to change their coach to come and convince the management members. Once they agreed, members could switch their coaches.

After several times, we concluded,

“Now, everyone should freely choose their coaches.”

Since who chose who is open to everyone as a matter of course, they proved that everyone chooses their coaches with discipline.

Although everyone can choose anyone as their coach, coaching requires skills.

Therefore, coach candidates participate in activities to enhance their skills, such as in-house coaching training and coaches’ discussions to talk about their issues.

We also had another issue.

When it is 100% up to themselves, members often choose their seniors in the same field as their coach. However, because of the lack of coaching skills, they sometimes talk too much about expertise and may fail to support member’s career development.

When a coach cannot fulfill the original purpose of providing consultation on a member’s career plan, we hold discussions to talk about what to do, including the option of quitting the coach on a voluntary.

Coaches hold a central role in Super Flat Organization management. However, if we evaluate the coaching skills and results, it might lead to the old, hierarchical ideas.

Therefore, Colorkrew does not reflect the coaching results in their evaluations.

Coaching indeed is a contribution to the team, and the company should reward it in the evaluation. However, we don’t evaluate the result or quality of the coaching.

This fact is a message to tell that coaches should not spend too much on coaching.

The question of “how can we give quality, effective coaching?” is a challenging one that we are and will be persistently asking ourselves.

Since it is sometimes difficult to talk about personal issues at the office, we prepared Coach Drinking system.
The system is to support conversations between coaches and coachees out of the office with dinner and drink.

On a Coach Drinking occasion, the company provides 10,000 yen for a one-on-one dinner between a coach and a coachee.

Many pairs use this system to improve their relationships.

Although it is voluntary work, coaching work takes time.

Therefore, although one coaching session isn’t that long, coaching with too many takes a long time.

Also, Coach Drinking with every coachee might cause health issues.

This problem is yet to be solved.

We need discussions on if we should limit the coachees’ number and keep working to solve the issue.

Now, everyone can change their coach anytime based on their development stage or tasks.

There’s no need to talk with HR or management members.

They think by themselves and decide on themselves.

I am happy that the system has changed concerning the member’s independence.

Evaluation system based on coaching

As I stated above, coaches are coordinators of 360 degree evaluation.

How should we choose 360 degree evaluators?

The next article will be about “Beating down the evaluation system.”