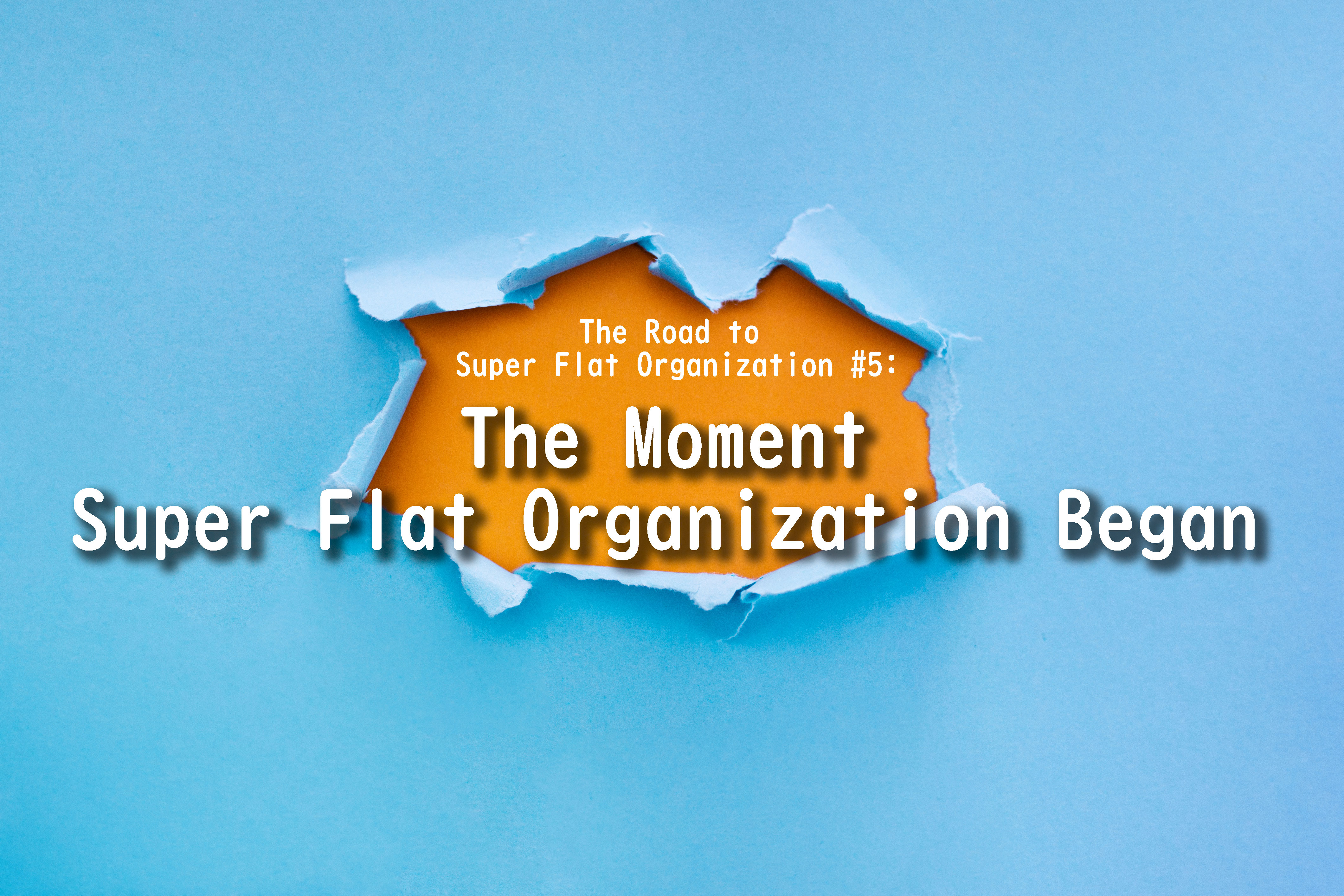 This series is going to continue for a little more. However, today I’ll talk about the exact moment of the dawn of Super Flat Organization.

In the last article, “The Road to Super Flat Organization #4 : First Open or First Flat?,” I explained how we came to have the three layers: the top, department managers, and everyone. Honestly, I, at that time, was thinking, “This is the best flat organization structure.”

However, the current Super Flat Organization in ISAO (Colorkrew at that time) started unexpectedly.

Began with the overseas stay of a department leader

Koizumi-san is the No.1 salesperson at Colorkrew. He first started sales at his 56 and became No.1 in two years.
He is always the center of attention of TV and magazine interviews.

Refer to the past articles for more about him:

“Age Doesn’t Matter Even After 60th Birthday! Ever-growing No.1 Salesperson!”

When he was about to come back from India, we realized this: “Hey, his former department already has another leader. What should we do?”
In Colorkrew’s view, we didn’t want to make a new unnecessary department for someone.

However, he’s been a significant contribution to the company, and his new position was an important issue.

We were out of good ideas, and suddenly, one department leader said to me.

“How about getting rid of all department leaders?”

What? It was super-surprising to me.
Even though we had few middle-level managers, at that time, department leaders were still leading the departments as managers.

“Almost everyone in this company has no management jobs and is required to do productive work.
Thanks to that, everyone keeps growing, and at that point, our positions as managers decrease our opportunities to grow.”
Therefore, we should put ourselves on the same level as other members.
It would be beneficial for us and for the company.

Leaders out of comfort zones

The positions of the department leaders were described as follow:
They were supporters and had fewer opportunities to do productive work on business sites.

However, as long as the organization works, their seats were stable and could make much more money than the others.

People at such positions started saying, “We’re laying our seats down and challenge new business on our own.”

In one week, the leaders held a meeting camp.

How are we going to run a business and organization without managers?

We thoroughly talked about the organization ecosystem.

We discussed for days and went out for drinks to continue talking for nights.

We had thousands of talks like: “I think I’m going to do this. How about you?”

Since they didn’t have assigned jobs, they all started from zero.

The sales manager re-started as one salesperson with zero personal sales results.

The manager of the largest department decided to start a new business on his own.

If they kept their positions, their future was stable, but they chose to give challenges.

Koizumi-san and other department managers took initiatives to destroy the hierarchy, made another re-start, and proved a successful model.
Since then, Colorkrew accepts no excuses based on experience. “I cannot do this because I haven’t done it before” is never acceptable, no matter how fresh or experienced.

The facts that we learned“everyone can make challenges at any stage of life” and “age doesn’t mean in personal growth” are the greatest assets of Super Flat Organization.

At Colorkrew, the lack of experience or age is not reason not to make a challenge.

I’m thankful for the crazy department managers who encouraged me and ISAO.

Continued to: The Road to Super Flat Organization #6: The Final Touch, Goodbye Departments!