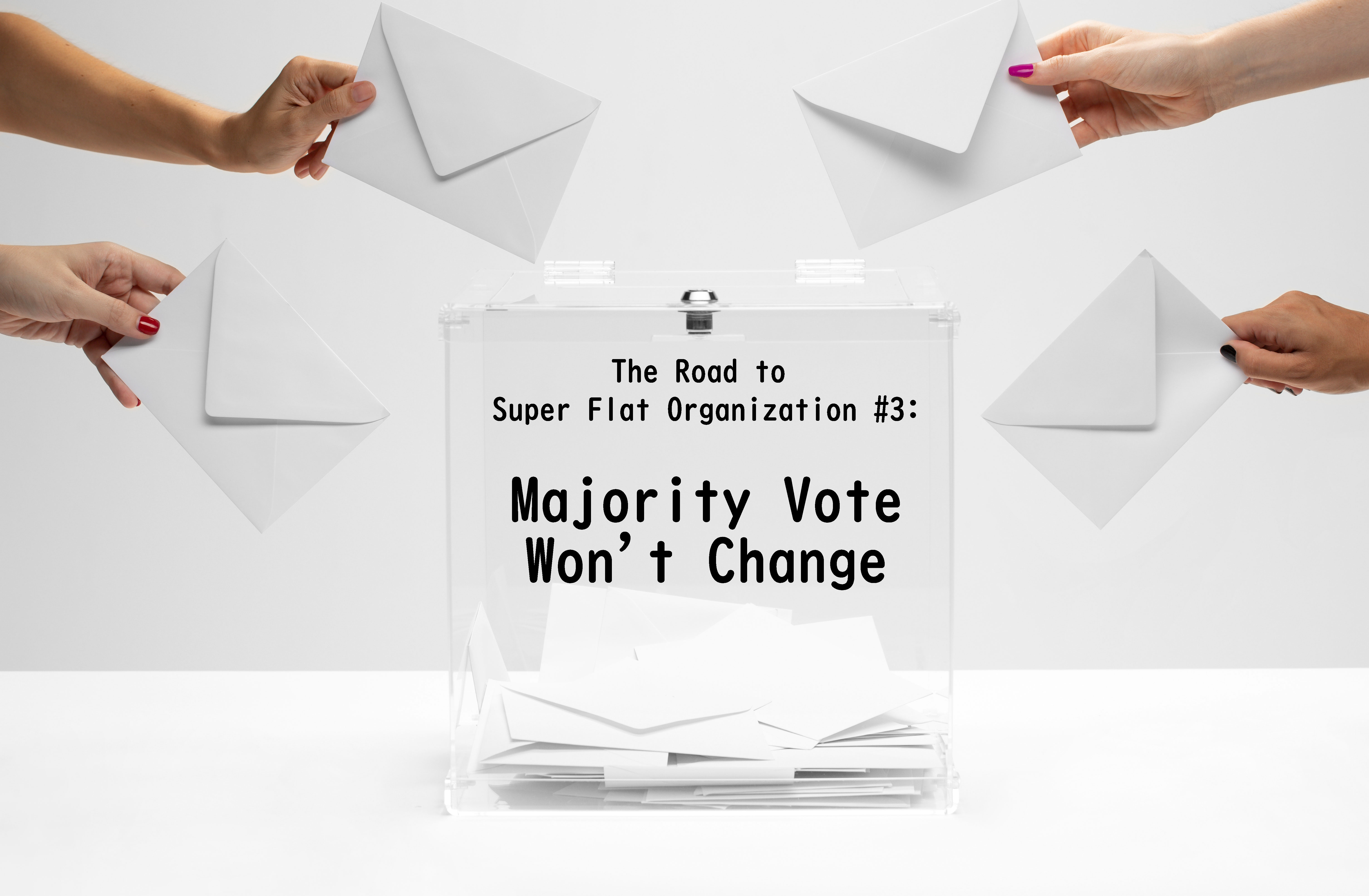 Last time, I wrote about making things ready to explain why before actually making changes.

The completion of Super Flat Organization needed drastic changes on the previous organization.
This time, I’ll talk about how I made decisions and how I moved things forward.

A company is a living thing.

Therefore, any company needs to adjust to the changing situations, or unless it causes tiredness and malfunction.

Even the rules and strategies that were once meaningful become outdated, or many trivial and minor rules are added as they last over a long time.

You cannot keep the same passion at the time forever, and the circumstances around you change at a surprising speed.

Therefore, every organization needs to change, and the fact “they need to change” is natural.

Not so many companies can survive when they do not suit the age.

Organizations only keep doing what they were doing before will decrease their performance.

“We need to change something.”

Many know this fact without being told.

However, they can’t do it. Why?

Plainly stated, it is because “reformations hurt.”

People naturally object to losing what they already have or change what they are doing right now.

Therefore, the more drastic the reformation is, the more people feel they don’t want to, as a matter of nature.

When making a decision, you should not take a vote.

Because most times, those who want to maintain win at majority votes.

A leader should take responsibility and be determined to make a decision.It’s the only way to make a reformation come true.

Although I said not to take votes, it doesn’t mean one should decide whatever s/he likes.

Leaders should talk with a variety of people in their organizations.

Also, they should not be persistent with their original ideas.

When you talk with someone, you will find perspectives you didn’t have before, and by doing it, sometimes you realize that you need to change your original decisions.

Leaders should first talk thoroughly, then improve their ideas, and finally, make decisions.

Case studies: Decisions that majority vote could not make

Let me show you some examples of past decisions and changes at Colorkrew that I made, and majority votes could never make.

-English standard in the promotion

We introduced English ability in the promotion criterion to promote globalization in the teams.
I think around 90% disagreed.

To secure a good view in the office with that everyone will learn more about others, we removed the partitions between, and the screens on the desks.

There was a disagreement from the engineers, but they finally agreed with the new monitors put along the office walls.

-Hiring those who do not speak Japanese

It was true this will have a negative effect on the work efficiency in a short time perspective.
However, we did this for the team globalization in the mid-long term perspective.

We put our effort together to build up the teams.

I’m not going into the details here, but I refused the rejections from most of the managers at the time.

Especially at starting up, many said, “Why are we spending the money we made on the services that we don’t even know if it worth!”

These are critical and controversial decisions.
Leaders should never take a majority vote, and instead, they need to take the responsibility to decide.

If majority vote was your strategy, why don’t you try this out?