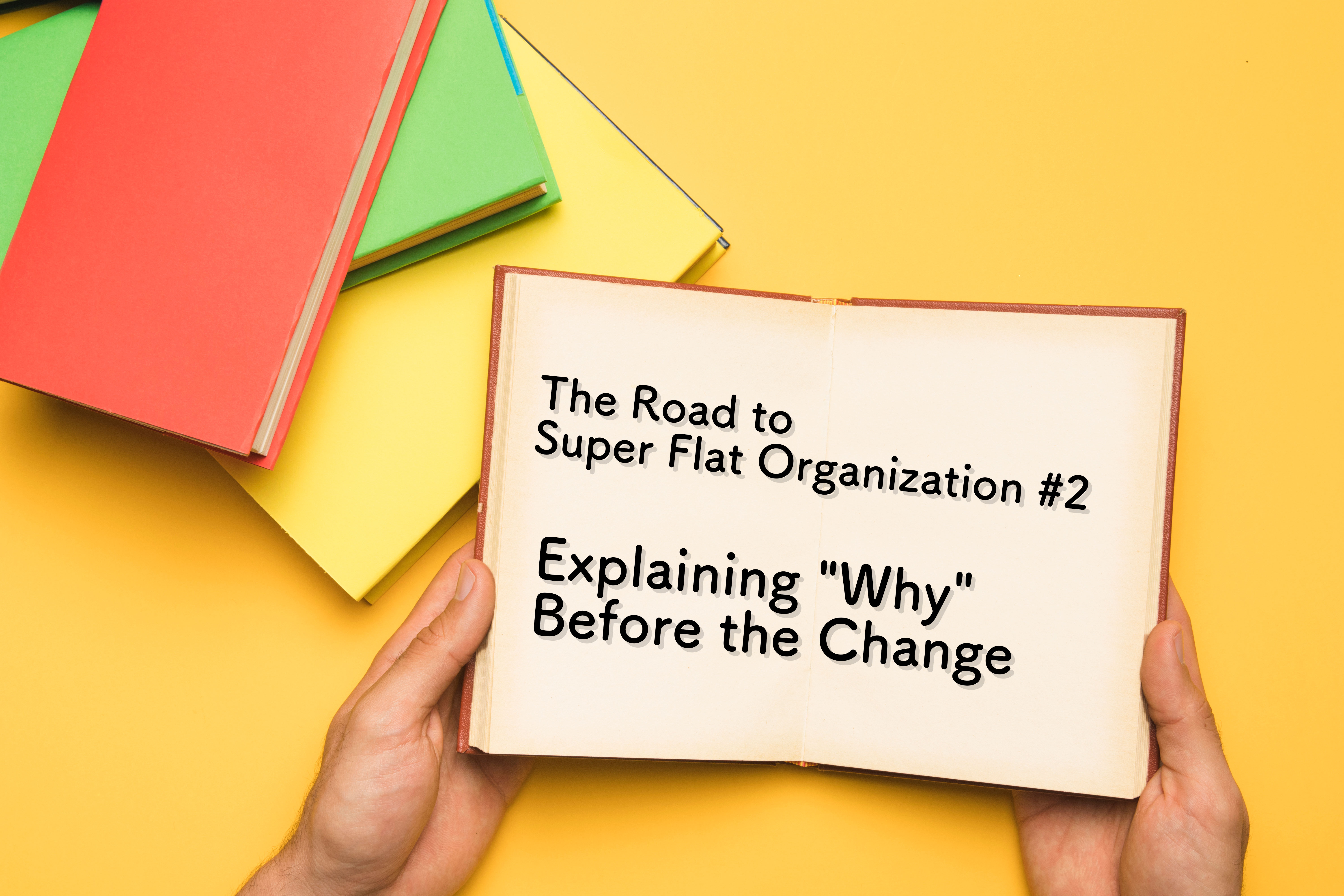 The Road to Super Flat Organization #2: Explaining “Why” Before the Change

In the last article, I explained that “making the company open” was crucial for Super Flat Organization.

Back number: The Road to Super Flat Organization #1: Not a Goal, but a Result

This time, I’ll talk about what to do before making an impactful reform and what we did in ISAO (Colorkrew at that time).

On Apr. 1st, 2010, the parent company CSK sold ISAO was to Toyota Tsusho Corporation, and I came to ISAO as a Toyota Tsusho manager transferred to ISAO.

I could not make it to the start of the new ISAO because I needed extra time to hand over my job in Germany.

Therefore, my senior at Toyota Tsuho took the position in April, and I took it over in October.

The beginning: nobody knew me

The first time, I remember it was challenging because I found it difficult to get used to the local languages.

I experienced a little bullying.

When I came to ISAO, I was like a transfer student in a sense, and I was a little bit nervous about what my days would be.

As I already mentioned, I was in nowhere without any titles until October. Therefore, most of the 160 employees, excluding the managers, didn’t know anything about me.

For the three months until October, a female employee I often talked to in a smoking room believed that I was a new salesperson who just arrived.

I was invisible because nobody introduced me to anybody, and besides, I was a total amateur with IT services. Even the managers at that time were like, “I don’t think you know about the services, so you don’t have to care about them.” I had nothing to do and was like a child who cannot live by myself.

However, this period helped me a lot because I talked with various people without awkwardness or worries, and some friendly colleagues told me the things I didn’t know.

Plus, I have to mention that two members seated next to me often had a chat with me, and they saved me a lot.

The darkness in the closed information

In a while, people gradually started to learn that I will become the representative in October. Then the employees began coming to me to talk.

Among them was a salesperson, and he one day told me a complaint that “the salary in this company is too unfair.”

Today, all the salary information is open in Colorkrew, but it was different at the time. So I went to an HR person and persistently asked him to make a list.

(He was obviously mistrustful, I think .)

Then, a surprising fact showed up.

The salary system was a total mess.

For most of the employees, the quality of work and salary did not match.

For example, one of the best salespersons made far less than a corporate assistant, or young aces make unreasonably few, while the veterans made relatively much more in general.

Some seemed unreasonably continued the previous salary condition. Maybe the managers in the past reflected personal like and dislike on the salary.

What was worse, employees had small pieces of information, rumors run based on it, and everyone was suspicious.

I thought it to be problematic.

Reviewing the salary from zero

In the previous article, I said making the company open means. However, first, you need to make things ready to explain why you’re making that change before actually doing it.

I considered revising the salary system and renovating the HR system were urgent tasks.

In December, I spent three days with the managers to discuss the individual value of the employees.

When we disagreed, we spent the time to reach a conclusion on which everyone agreed.

This way, we re-evaluated the individual value from multiple perspectives and put the employees under the new grades of 11 layers.

We didn’t put resources into consideration and tried to evaluate on an absolute scale, but interestingly, the total sum of the salary was almost the same.

Chaos happened after the notification

The new grade system started on Apr. 2011, and I notified of it two months earlier.
Of course, there was no problem with those who had a raise, but it was tough to tell someone that their evaluation is below their present salary.

Nobody feels good when suddenly told, “you don’t deserve your present salary so, you will have a pay cut.” Some got angry, and some were like, “OK, then I’ll leave.”

Personnel assessment is in the “gods’ realm”

There could never be a perfect answer in personnel assessment.

It is man’s work, so there could be errors.

In my opinion, regarding personnel evaluation, it is something that belongs to the realm of god. Therefore, you always need to keep in mind that there could be mistakes anywhere, anytime.

Besides, you need to understand that evaluations reflect the personnel value only in that company, and it is never the same in the whole market.

A manager makes an evaluation believing “I am always right” is quite risky.

Therefore, those who have the authority to evaluate must always be humble.

Asking yourself, “Can you explain?”

All perfect personnel evaluation is a different task. Nevertheless, I believe managers should disclose the personnel assessment.

You should be thoroughly ready to answer any questions. Maybe you will get criticisms.

Making judgment with determination is a crucial step forward to fairness.

Regarding other management in a company, you should always be aware of “if I can convince others.”

If not, you’re probably feeling guilty or hiding something back.

For example, in closed management, you can be like, “OK, this guy is nice to me so, I can give him a raise,” but it won’t work in open management.

Persistent work until you can convince them

Not only the personnel evaluation but in everything in the management of a company, you must be ready to explain why you do that.

When things are ready, you can then start making them open.

Contrarily, if you started revealing everything when you are not ready to explain, you can’t convince anyone when they have a question.

This time, I talked with the past Colorkrew case, and I believe that situations where you can not explain why exists in any companies regardless of the seriousness.

First, convince yourself to be able to explain why.

Making changes in your company starts after that.