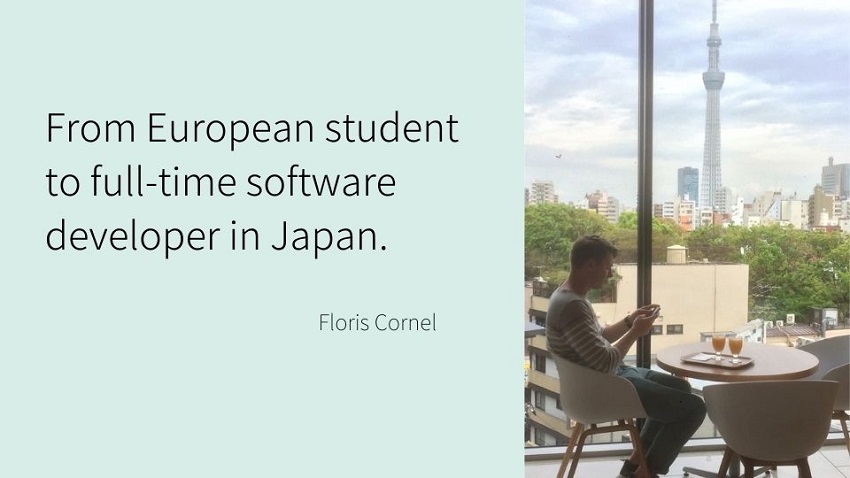 From European student to full-time software developer in Japan.

Applying to Colorkrew from abroad

About 2 years ago I started thinking about what I wanted to do after graduating. I had been living and studying in Groningen, which has a population of about 200.000 people, and I decided that my next city would be Tokyo. I had visited Japan a couple of times as a student to join a conference or do some sightseeing, but I had never lived there. In fact, I had never lived outside of the Netherlands before.

My graduation was planned for April of 2020, after which I intended to work in Japan. I did not speak any Japanese, so I wanted to work at an English speaking company. With that in mind I started looking for a job. I started browsing a number of job listing websites, looking for vacancies. Software developers are generally wanted, but a lot of companies in Japan are looking for candidates that already have a visa or candidates that speak basic Japanese. Lucky, Tokyo is a very big city, so I was able to find a number of companies that were looking for people with my profile.

The company that caught my eye was Colorkrew. While reading their profile and website, the super-flat model immediately peaked my interest. It looked like a company that would be fun to work at, and their technology stack was a good match for my previous experience. Most importantly, I was looking for a company that would allow me to grow, both in terms of engineering skills as well as my soft skills. Colorkrew seemed to be a company that supports growth, for this reason I decided to reach respond to the vacancy.

At this point in time I was still a studying at the other side of the world I started chatting with Kiyo from HR and she invited me to do a video interview to get to know each other. After a couple of interviews I was offered a job with visa sponsorship in Japan, I was very happy to have found a company that looked comfortable to be a part of. It was January 2020, I would graduate in April 2020 and fly to Japan in May 2020. That was my plan anyway.. 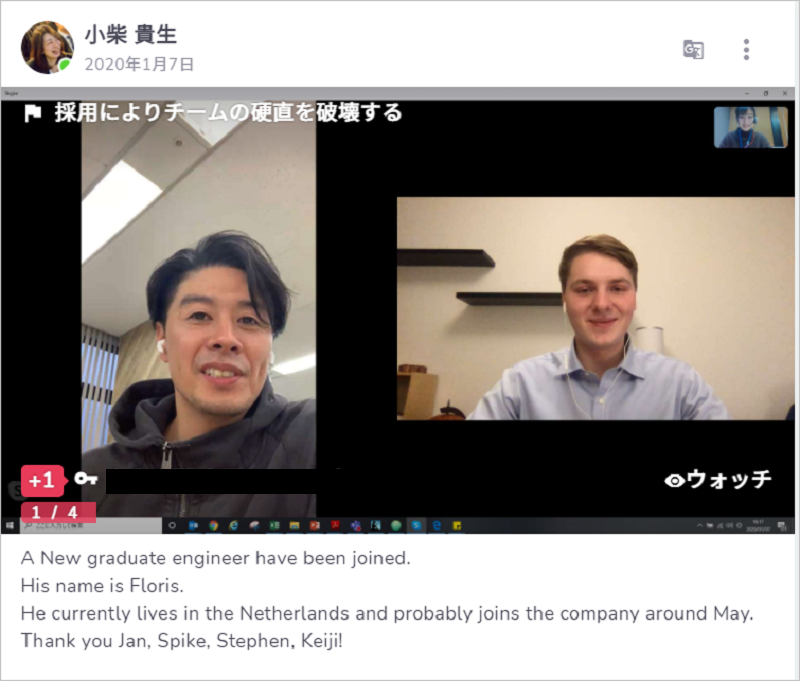 What happened next were a couple of setbacks. First, due to the pandemic which started after I got the offer but before I graduated, one of my exams was delayed indefinitely. My thesis presentation was also delayed. Then in April, the Japanese government introduced a travel ban that would prevent me from flying to Japan. I was scared because although I was offered the job, I had not signed an official contract yet. I was on the other side of the world, with a 9 hour time difference. I was afraid they would retract their offer because of the inconvenience of the situation. Luckily, I was wrong.

This is when I discovered what a great company Colorkrew is. I was extremely happy when they asked me if I wanted to start working remotely, and I said I would like that. They sent a work computer to Europe and told me I could work during the Dutch daytime. My studies were suspended at the time, and so I started working full-time for Colorkrew as a junior Developer. Because of the time difference, I had a few hours in the morning that would overlap with the Japanese working day. After that, I spent my time working on my tasks. If I had any questions I could write them down and I would have an answer when I woke up.

In August I was able to take a month time off to finish my last exam and graduate. I was preparing to move to Japan as soon as the border opened up, and then finally there was a chance for me to go, so I went. First I had to apply for my working visa at the embassy. Then I had to prepare all necessary measures relating to quarantining for 14-days and traveling safely from the airport to my quarantine location. After all my plans were complete I said a quick goodbye to my friends and family and I flew off. On November 15th 2020 I had finally arrived in Japan.

My first year in Japan

For the last 18 months I have been working on the Mamoru project. At first I was mainly learning about the application itself and the framework it was built on. I started out with small tasks like fixing a bug or adding a small feature. As I grew more familiar with the technology, I was given bigger features to work on. I had told the project leader that I was eager to get a bigger challenge, and in January he delivered. He wanted a new service that I would build a new back-end and front-end for from scratch. It was exactly the kind of challenge I had been hoping for.

The project involved building a new service around the Japan Post API, that allows customers to send physical mail from our application by uploading PDF files. The API Documentation was written in Japanese, but I had become very comfortable using different translation tools to understand Japanese documents. It took me three months to create the first version of the service. A lot of time was spent learning about technologies, and I was able to grow a lot during this project. 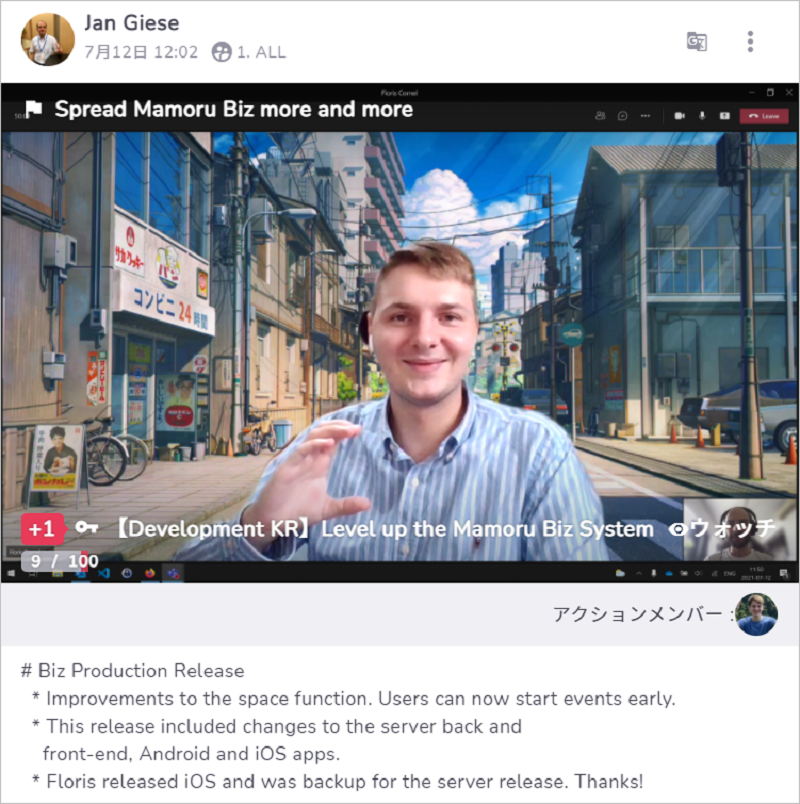 Colorkrew is not the kind of company that focused solely on profitability. There is a wish help other companies in Japan discover a new ways of improving. One example of this is Goalous, a product that strongly helps internal communication between employees. Through Goalous we can connect with each other and understand the goals and actions of our colleagues. It strongly promotes openness of information within the company, and stimulates interaction between people. During my time abroad, it was through Goalous that I was able get to know my colleagues and the other projects in the company.

During my time in Colorkrew, I have seen some changes happen. The company name changed just after I joined, from ISAO to Colorkrew. There was a shift from office work to remote working. Currently, we mainly work remotely, but we occasionally go to the office to communicate with my colleagues. The use of English in the company has been steadily increasing. In my opinion, Colorkrew is a bi-lingual company. Meetings are conducted in either Japanese or English depending on the participants in the meeting. Almost all meetings and talks that I attend are conducted in English. Our company wide Monday Morning Topics meeting is the only regular meeting I attend that has Japanese talks. There is a special English recap meeting afterwards and recently most of the talks have been in English anyway. For me as a foreign developer, the message has been clear: “You don’t have to speak or learn Japanese to work at Colorkrew, but if you want to learn Japanese, Colorkrew will support you”.

The project I am working on, Mamoru Biz, focuses on making office administration more convenient. In colorkrew, we are using this software as well. We have an seat reservation system and office map so you can easily locate people and see who is working remotely. In our daily communications, I don’t have to worry about seniority and honorifics. Colorkrew is flat, we are encouraged to use first names without honorifics. This has made the communication comfortable, and eliminates fear of awkwardness surrounding misunderstood formalities. 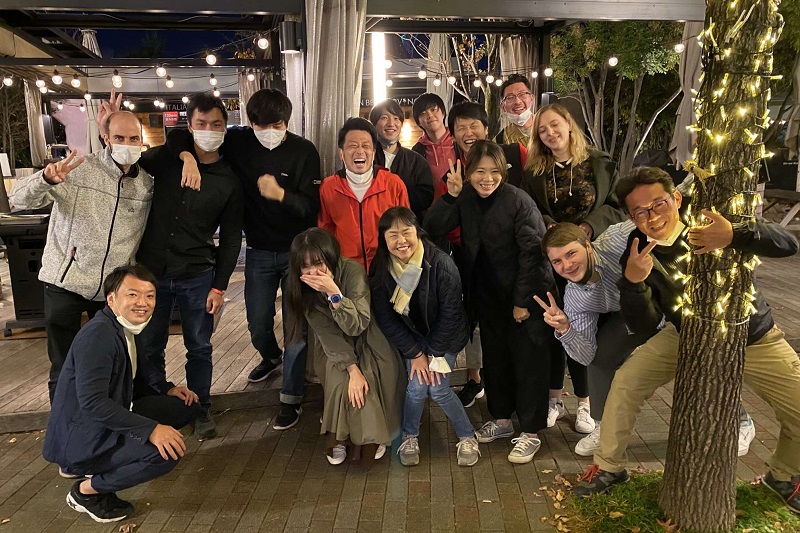 Besides my work, life in Japan has been mostly restricted to my own apartment due to the pandemic. As a foreigner that does not speak the language, some simple things can be rather challenging, like opening a bank account or signing up for a mobile provider. With the help of my colleagues I was able to do things these. I have also found that communication is possible with only a few words if you have the right attitude and determination. Colorkrew is a great working environment for newcomers to Japan. I have watched both myself and the company grow in the last year, and I am looking forward to see what further growth awaits.