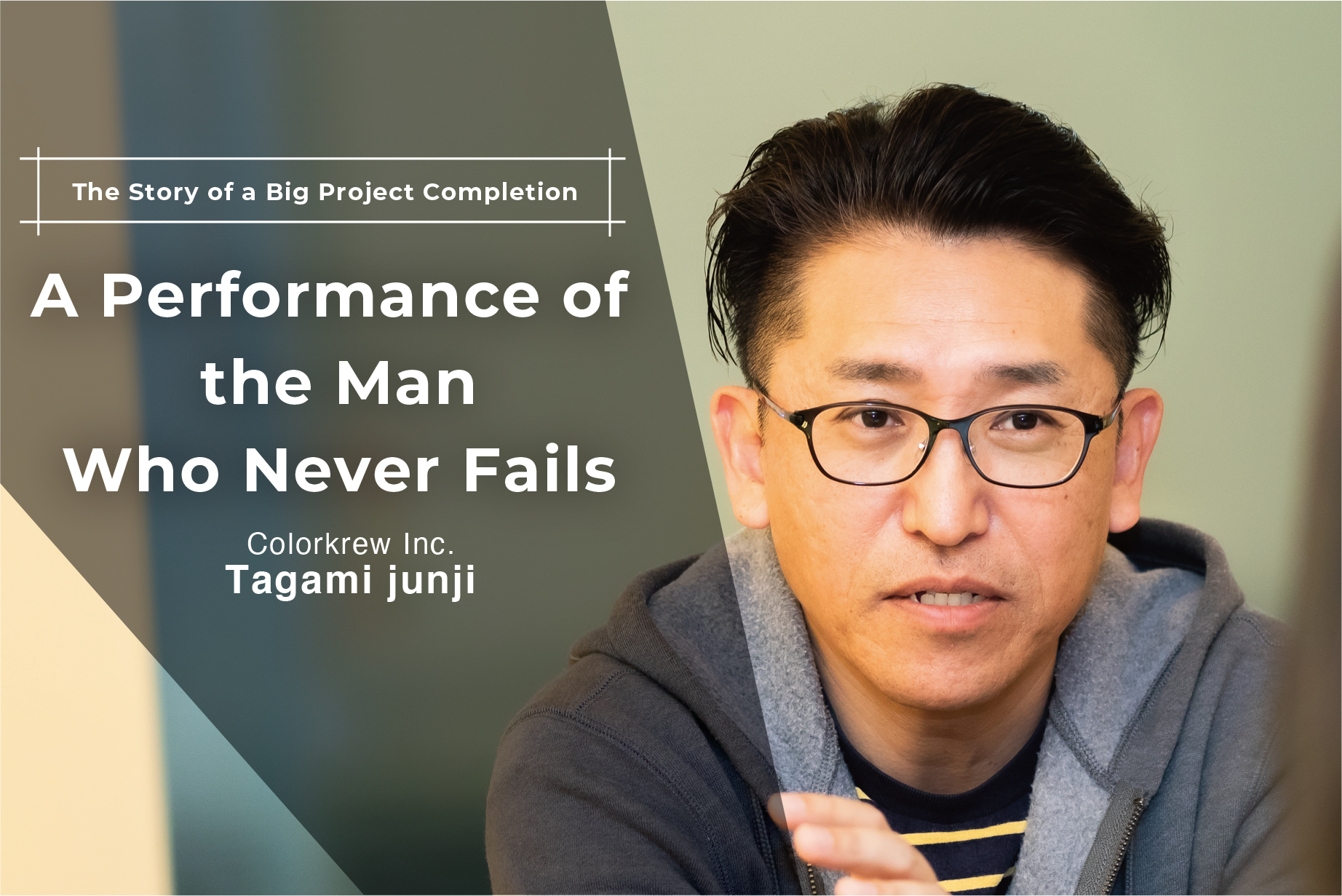 A Performance of the Man Who Never Fails: The Story of a Big Project Completion

I’m delivering you the latest interview article first time in a while!

This month, one big project came to its completion. The project was rewarded in the Award presentation, where the company praises successful outcomes of the previous period.

We had an interview with Mr. Tagami, the No.1 Project Manager (PM) called “the man who never fails.” We had him talk about the history of the 20 years long project that had been contributing to the company, what the team learned through, and the hardships and delights of the members.

Reflection on the project 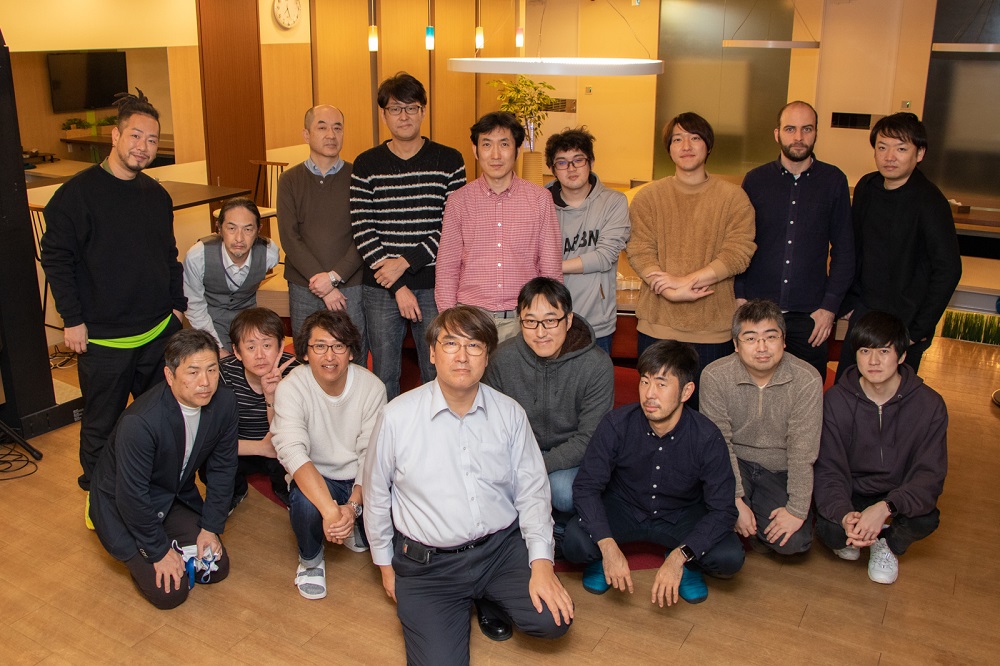 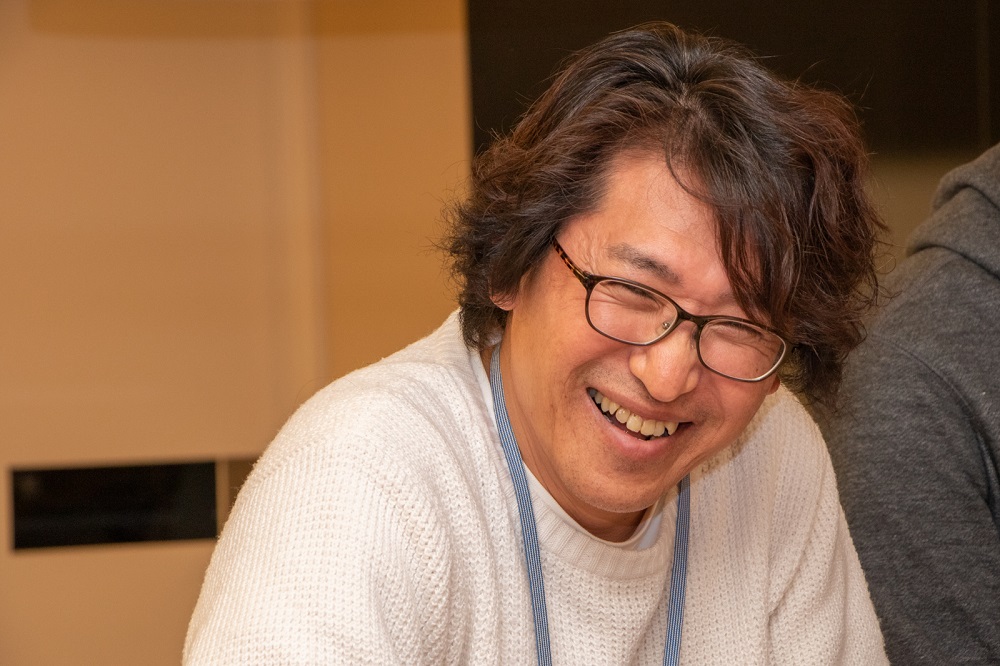 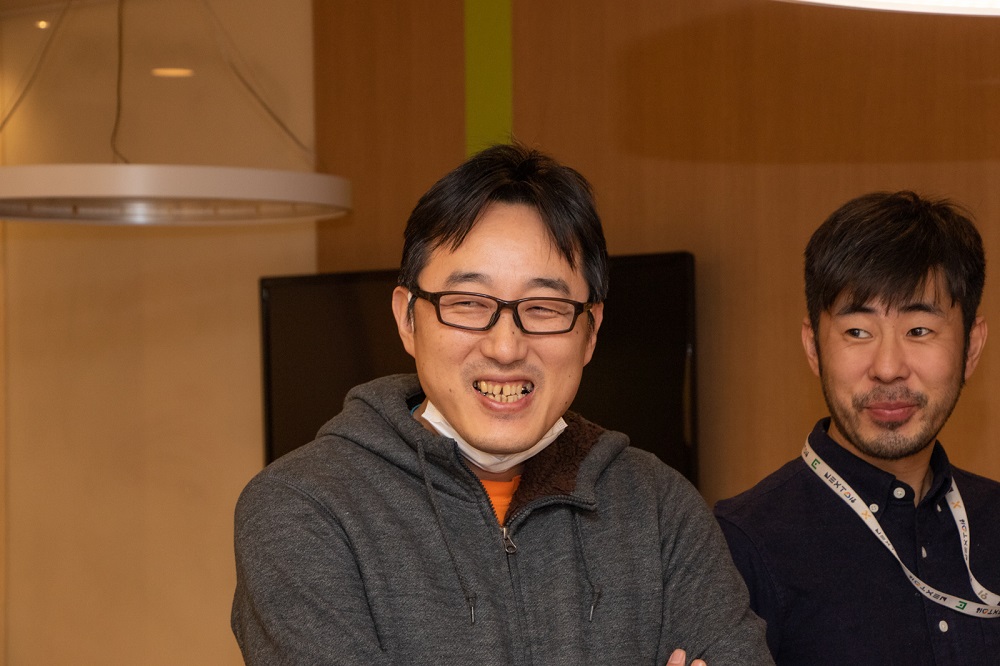 Harada (Da-hara): This February, you and your team have finished the cloud migration project of the core system. We also had a good-job celebration party.

All the members received the award, and you received the MVP award at the Award presentation in the All Staff Meeting we held this month.

Colorkrew,once every half-year, elects people who made meaningful contributions and gives them award. According to the award grades, they receive a bonus that equals two months’ pay for MVP, 1 for Gold, 0.5 for Silver, and 0.2 for Bronze.

Tagami: Thank you. I’m honored to receive the honorable MVP.
I would like to thank everyone involved. We could not finish this without the hard work of everyone in the team, and all the help from the people who supported us. Thank you so much.

Harada: It was a great job. Today, I would like to learn about the project once again. What is system cloud migration?

Tagami: I guess it is easier to understand if I describe it as a cloud migration of membership management payment system.

At that time, we installed various payment means.

Although I cannot tell the exact numbers, the core system runs the member management service to which more than a million users are registered and the payment service where more than ten payment methods are available.

We have several payment methods that we installed first in Japan.
Harada: I see. This is the project started at the same time as the company. Twenty years make me think of the long history of the project.

Tagami: The system has been operating for almost 20 years, with several renewals.

We started considering cloud migration in 2018. At that time, only one engineer was considering the migration.

Harada: That’s how the cloud migration project started. What period was the peak of this project?

Tagami: I guess there were some challenges.

When the existing on-premise environment aged, we had two options: replacing the servers and migrating to the cloud environment. After analyzing the pros and cons, we decided on cloud migration because our company has strength in cloud technologies.

As a result, we ended up with AWS. It was challenging for us to install Kubernetes.

Tagami: It is a docker container management system.

Assume it is software that automatizes management such as container deployment and scaling.

Tagami: It is similar. Autoscaling is a system that increases and decreases servers quickly, while Kubernetes does a bit more. For example, it constructs system construction quickly and easily on an application basis.

Harada: How is that good?

Tagami:Systems usually consist of service with seven different URLs.
Of course, each application has a different usage frequency. In an on-premise environment, different servers are needed for different applications.
Even with auto-scaling, you still need to prepare servers for each application.
On the other hand, Kubernetes treats server clouds as a server cluster, or one single big server, and can freely apply resources for the applications that run on it.

In short, it is more flexible in using the resources provided by the servers.

Besides, servers and applications are independent, and therefore, even if you suspend some servers, services can still work. That’s another advantage.

What they gained through the project 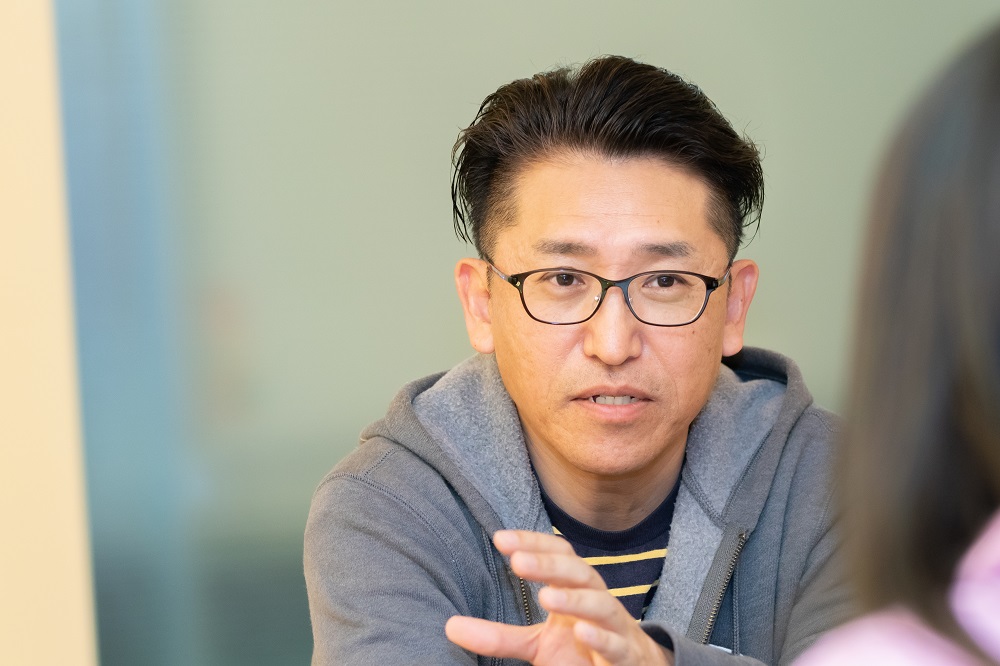 Harada: Did you find individual growth in the members through this project?

Tagami: Speaking from technological perspectives, all the members got used to cloud computing as the result of migration from the legacy, large scale system to the latest environment.

rom individual perspective, although our company has no hierarchy and individual-oriented, I felt everyone has become even more autonomous through this project. Namely, each came to think of what they should do, and the whole team strived to lead the project to success.

Thanks to the attitude, we could complete the project, and that the members have fostered the idea of “finish the project as one’s tasks” was a great success.

Harada: That’s great that everyone sees the project as their task.

Tagami: Yes. It was a top priority project. So we were told: “if we fail, the company will be in trouble!” So I guess everyone had heavy pressure.
Harada: The team consisted of various members from various experience background. Did it effect the project?

Tagami: Some have a long history in the company, and some are relatively young.

However, each of them actively took care of their tasks, so everyone had individual development regardless of their experience. 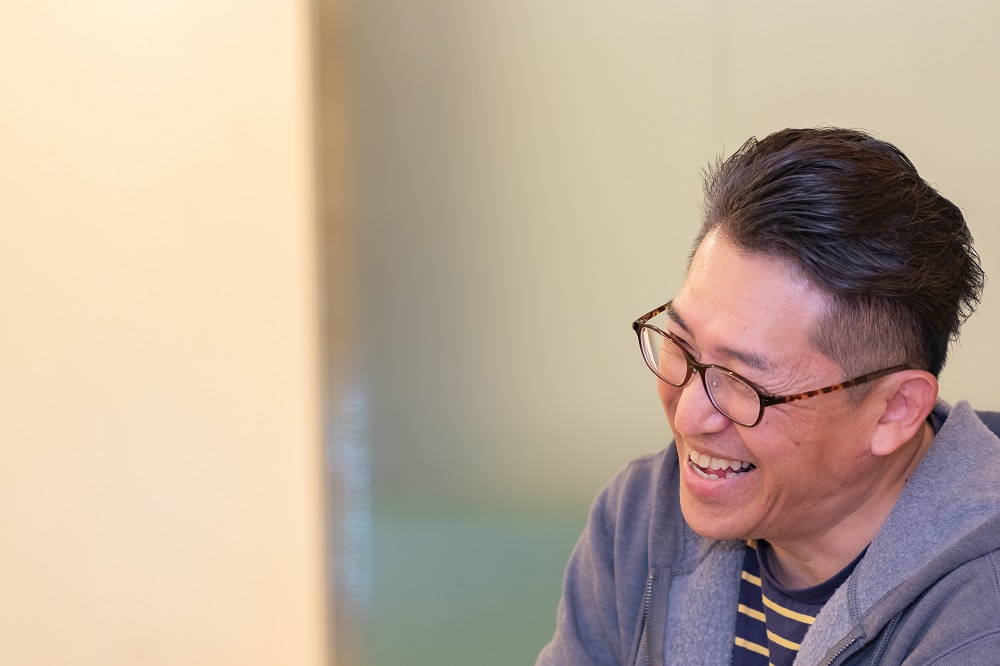 Harada: In this and past projects including million-dollar ones, you have been successful in the budget and on the schedule, without troubles.

Harada: How could you be such a superman?

Tagami: I know I made such results, so people believe everything was in control. But honestly, I spent some rough time to get things done.

I struggled a lot behind the curtains.
Harada: Wow, is that true?

Tagami: I understand that when seen from some distance, I proceed with projects steadily. However, there’s no “100% safe” in system-switching.

I get nervous every time, to be honest.

Harada: But in the end, you get great feedback from the clients. Isn’t that awesome?

What do you particularly care about as a PM?

Tagami: For me, quality and deadline are the top priority. Cost, of course, matters, but quality and due date are much more critical. So I always finish projects before due dates at any cost, including putting in more resources.

Harada: I see. I guess that’s how you gain trust from the clients.

Tagami: Regarding this project, I spent more cost on human resources than the original estimate.

Plus, I like rehearsals. Every time I lead a project, I conduct careful rehearsals.

Tagami: Without good rehearsals, there could be no good work. I’ve done them at every opportunity.

It sometimes leads to extra costs.

Each member needs to understand everything they need to do on the switching day.

We will suspend the client’s services, make announcements in advance, and the time is limited.

Harada: Surely, it would be great trouble for the clients and users.

Tagami: Mostly, the first rehearsal would fail. Usually, assumptions are not enough at the first time.

Therefore, we repeat things over and over, and when what we would have to do on the day is learned, we can move to the real thing.

We cannot do the real switching without 100% progress at the rehearsal.

Tagami: It does. But when I ask the members like “Are we ready for the X-day?” their answer is often, “We should do one another rehearsal.”

After all, they have more stress when they’re not 100% ready and have to do real things.

So, for this time as well, we did four rehearsals. They were thorough ones.

That’s why everyone was assure of what do to on the switching day.

To become the best PM in the future. 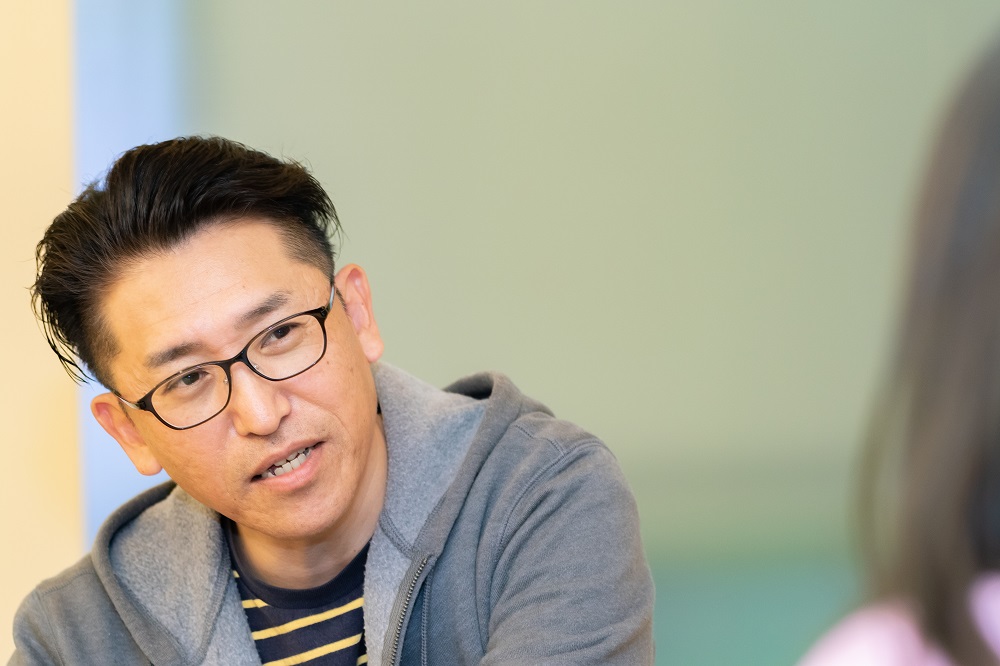 Harada: Now that you finished a big project, do you have the next goals and objectives?

Tagami: Although we finished the cloud migration project, we still have a lot to do.

Early in this period, a project as big as this one has already started.

The same team member and some more members are working on the project; I’m sure our team will be successful.

Tagami: Furthermore, I want to standardize project management and promote it.

Harada: Why did you choose this area?

Tagami: At my former job, I mostly worked as an individual rather than in a team and started PM work after coming here. Therefore, working with team ability and project unit was quite insightful for me.

PMs have their ways of doing, and strategies are not always shared.

I have PM experience in several projects before coming to go by “a man never fails.” So I want to share my knowledge and experience with the teams and improve the overall PM level.

Harada: I understood! I want you to tell me your secrets to success! What are the keys in PM?

Tagami: Well, I guess it is to “think of what comes after this.”

Of course, we make the Work Breakdown Structure in advance, assume what is likely to happen, and put them into the schedule.

Harada:That is logical thinking, isn’t it? Where I’m not good at.

Tagami: Haha. It is true that no matter how hard you try in advance, you’ll still have holes in the plan. However, I think it’s important to try the very best to minimize these holes.

Harada: It’s insightful! PM skills would be a great knowledge to share with the company!

Tagami: I think it is. I set this goal because I thought sharing my experience could be a contribution to the company. I want to fulfill it.

Harada: I will be looking forward to it! Thanks for the interview!